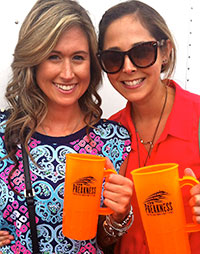 During the 139th Preakness Stakes in May, the Pimlico Race Course in Baltimore not only featured some of the most renowned race horses, but also a mini festival known as the InField Fest – a venue that bills itself as “the people’s race; the people’s party.”

Promotional Products – InField Fest allowed for something more than betting on horses. Attendees to this multi-entertainment event could visit food and beverage vendors, and shop at the Preakness store for branded apparel, caps, cups, bags and other logoed items. Plus, there were two stages with music performances by top entertainers such as Nas, Switchfoot, Eli Young Band, Sundy Best, Go Go Gadjet, Glenn Morrison and a headliner by double Grammy-award winner Lorde.

One highlight of the festival was the Mug Club. Participants were able to prepay for their tickets online for exclusive privileges to the

Mug Club, open to adults 21 and over. Privileges included access to all InField Festival party areas and Mug Club areas, and all beer was included at the Mug Club stations. Upon entering, Mug Club tickets were exchanged for a collectible, neon orange mug. The mugs were valuable commodities, since they could be refilled with beer at the filling stations; however, they could not be replaced if lost or stolen. Although the refill stations often had long lines, the keg volunteers always filled the mugs over the brim.
The mugs were imprinted with the Preakness logo on one side and the InField Fest logo on the other side. In addition to the logoed mugs, one of the concert stages was colorfully branded with the Jägermeister logo. Nearby, a giant orange Jägermeister tent offered attendees a free photo at their booth, as well as shots of Jäger for a small price.

The mugs, however, proved to be a star attraction. They were so popular in fact, that even the festival’s star headliner, Lorde, wanted to be a part of the Mug Club – in the middle of her mid-day set, she yelled, “Hey, someone throw me one of those orange mugs.” A friendly front-row fan quickly obliged. And, according to The Baltimore Sun’s review, rap star Nas, the concert’s other headliner, is quoted as saying: “Thank you, orange cups!” after performing “It Ain’t Hard to Tell,” another reference to the logoed mug, which attendees “kept raising to the sky in approval throughout his hour-long set.”

Reward, Recognize and Remember – When planning your next event, consider a commemorative item to give attendees. Depending on the venue, it can be practical, like a logoed plastic cup, or something more high-end like etched wine bottles. Your best bet is to contact us, your promotional products distributor for ideas and products that fit the bill.